If not stated otherwise all content on this page can be used unter the terms of creative commons: Attribution-ShareAlike 4.0 International (CC BY-SA 4.0). 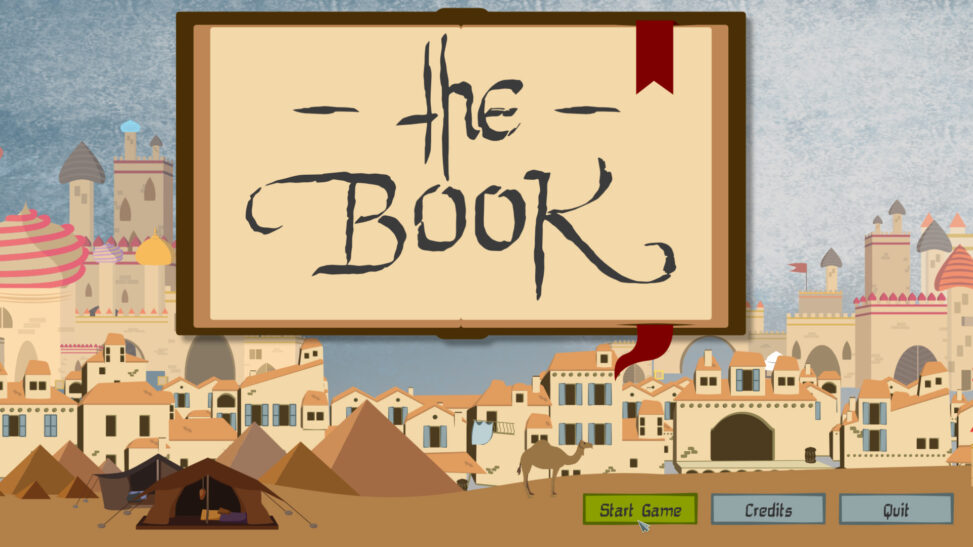 I take part in some Game Jams once in a while. For all readers who are not familiar with this setting: This is what wikipediasays:

A game jam is a gathering of game developers for the purpose of planning, designing, and creating one or more games within a short span of time, usually ranging between 24 and 72 hours. Game developers are generally made up of programmers, game designers, artists, and others in game development-related fields.

Personally I like the atmosphere in the extremely compressed brainstorming sessions. And I like the idea that a small team produces something awesome in a very limited peroid of time. Unfortunately a lot of projects do not reach a satisfying stable (alpha-like-)release. So please be aware that the following sketches were made in less than 2 days under very „special“ circumstances.

The book is a strategy puzzle adventure about the evolution of a religious ideology. The player chooses which rules they wish to include in their holy book so as to appeal to the largest number of followers while traveling from town to town in order to spread the word.

Contribution from quite a large team for the Global Game Jam 2015. The game is extremely story-based so I decided to create an own font that fits into the global look of the game (the font is called „Abraxas“ and can be downloaded here for free!) GitHub-Link to the source: click

The about page with all the contributors

Project „Be“ (spiritual experience for VR)

Spiritual game for the Zeiss VR ONE. With this VR Headset you do not have the option of a separate switch (like in Google Cardboard) so every game control has to be made with the rotation angles of the head. We decided that you can move freely through the game’s world, steering a little thing called „Be“. By collecting items you can rearrange the architecture in the world that it it is reordered again. Modeling was done entirely in Cinema 4D. We did not use any textures, all visual effects are done by light. My buddy Felix did the coding in Unity.

The visual look plays a lot with references on the ocidental cultures (churches, destroyed cathedral, stonehenge, chess, castles and towers)

The observatorium in the scene, next to a Renaissance pavillon

The whole game scene in the „winning“-arrangement

Awareness campaign for a fictional „save the pandas“ project

Prototype for a 40m² installation. The design was entirely done with Affinity Designer: Each state of the bear is a separate drawing. I like the tool a lot, for me it is the perfect alternative to Adobe’s Illustrator. However it has a few bugs and is not working entirely stable. GitHub-Link to the sourcecode: click

Viewport of the screen:

Some of the spritecycles of the moving panda:

Three friends, less than 20 hours time and one idea. Our recent contribution to the Ludum Dare 2016 was a little „endless“ runner. The special look was achieved by using only hand drawn artwork exclusively. Thanks to Sandra who did all the design. My job was phtography and animation – for the first time I did not use Cinema 4D or After Effects because Alex (aka „the godmode-coder) told me about Spriter Pro (also buyable via Steam). Although the software has still some mayor bugs and instabilities I liked the quick and easy 2D workflow a lot!

It is also possible to export game-engine-ready spritesheets with ease so I animated every single object in the game via Spriter Pro. You can find a post on the Ludum Dare website by Alex about our game (also with downloads!) here The link to the GitHub page